I still don't know my sexuality – and that's fine

Sexuality isn’t always a fixed part of who we are: it can change throughout our lives. Daisy Jones, editor, writer, and author of All The Things She Said, talks about how her perception of her sexuality changes – and why that’s fine. 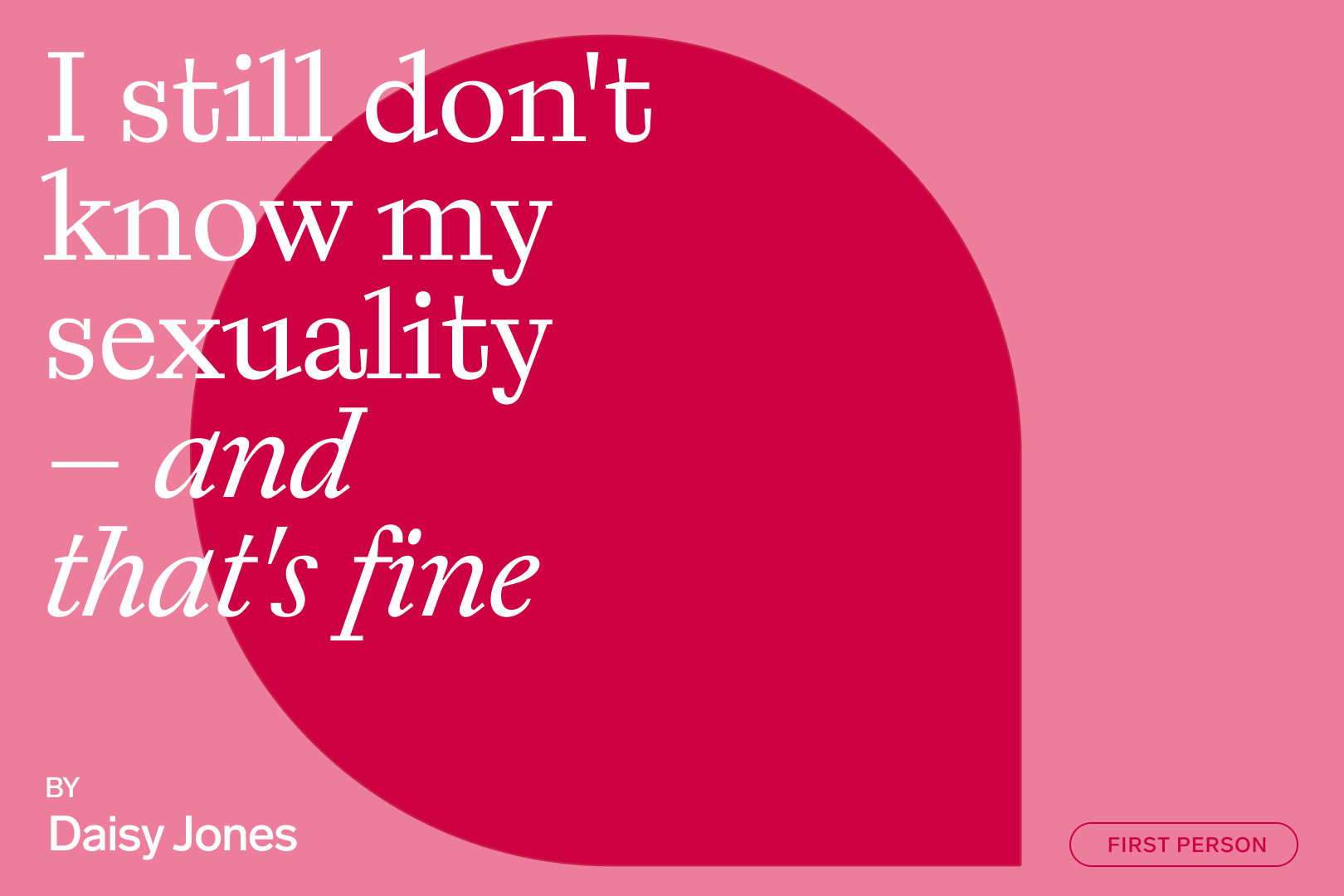 For most of my adult life, I've referred to myself as a “queer woman.” Sometimes, for shorthand, I use the term “lesbian.” This is partly because it feels like the truest label at present from the ones available. I've been in a happy, long-term relationship with a woman for years. Before I met my partner, I dated women, and was in another long-term relationship with a woman before then. I've only ever been in love with women. I find women more interesting. If I'm in a crowded room, I pay closer attention to the women there. I've always been a “girl's girl” – in more ways than one.

That said, when others hem me in as such, something inside me occasionally bristles (even though I've written an entire book about lesbian and bi culture). They don't know me, I think. If they did, they'd know everything is more complicated than that. Because even though I love women, I have been drawn to men too sometimes, but in a different way. I can try to explain, although I'm not sure it makes sense: If I want a woman to spill all her secrets into my ear at night, I want a man to say nothing at all. I want a man in a purely physical way, like biting into a sandwich. Or maybe it's more the other way round, and I want to be the sandwich. I can't always tell. But the feeling exists, and it's palpable.

I've had romances with men also. As a teenager I'd spend hours swirling my tongue around the mouths of boys in skinny jeans, boys with bobbing Adam’s apples and rough wiry legs and grabbing hands and stubble. I used to love the absolute horny urgency of them. Their zippers and sweat. The way a boy can make you disappear – becoming just a body, nothing else; its own form of relief. Plenty of people hate being objectified, and for good reason, but I've always enjoyed it in the right context and with my consent. How simple, how meditative. Isn’t that just a different shade of romance? It's hard to tell.

Sometimes I think my sexuality has absolutely nothing to do with gender, and why am I even trying to force the two concepts together? If we think of sex as a mixture of dominance, submission, and connection, or intimacy, then what has gender got to do with any of it? I am attracted to my partner in a visceral way, yes, but it's her that I fancy, not necessarily her gendered attributes. Although aren't her gendered attributes also part of her? Isn't our womanhood and queerness at least part of what drew us together? Or has it got nothing to do with it? Again, it's hard to tell. Turns out that none of this is simple – and will it ever be? I have these sorts of murky conversations with myself often, and never emerge with clear answers.

For a lot of people, fancying more than one gender is simple: they're bisexual. Nothing complicated about that. But that label doesn't really fit me comfortably, especially when I only tend to fall in love with women, not men, and the term “bisexual” doesn't seem to account for that. One label that I've occasionally toyed with is “pansexual homoromantic.” In asexual communities, the “split attraction model” is used often. It refers to a differentiation between different types of attraction, whether that be sexual, romantic, or platonic. Asexual lesbians exist, for example, as do aromantic lesbians. Could I be a lesbian with pansexual tendencies? A pansexual with lesbian preferences?

I occasionally wonder how much one's sexuality has to do with the other person, and how much it has to do with oneself. There's this brilliant scene in Torrey Peters’ 2021 novel Detransition, Baby where one of the characters, Ames, brings himself to climax by imagining that he is in fact the woman he is fucking. Later, the main character, Reese, points out that this is a form of dissociation. But can sex not sometimes be pleasurable when you're seeing yourself through another's eyes? Or when you're toying with the back and forth of perception? Maybe I am not in fact attracted to men, then, but to the way I appear via some men's eyes. Maybe it makes me feel more submissive, or something. But does that make the attraction any less authentic?

Labels and identities can of course evolve over time, which adds a few more complications into the mix. Plenty of lesbians I know used to have boyfriends before they recognised themselves as queer, or used to have sex with men, before realising it no longer made sense to them (the term “gold star lesbian” – a lesbian who has never slept with a man – is considered annoying and outdated). Equally, I know some trans people whose attraction shifted once they transitioned and became more settled within their own identities. One trans man I know used to sleep with women when he was perceived as a woman because it made him feel more masculine. Post transition, he just sleeps with those he's attracted to, regardless of gender. Sometimes sexuality is fixed and knowable. Sometimes it's more elusive than that, less clearly defined.

Indeed, people love to think of sexual orientation as a relatively simple concept. You're born, you're pushed into compulsory heterosexuality, and then you are forced to “come out” and reveal your “true self”. And, for many, this narrative makes sense because they have always known that they are gay or bisexual or whatever. Saying you were “born this way” can also act as a middle finger to conservatives and homophobes who think conversion therapy actually works, or is anything other than reprehensible. And there is obviously a power in saying I am who I say I am, and nothing can change that. Especially when you've always known the nature of your queerness, when there's been no question from the start.

But for some of us, sexuality is also an evolving, mutable thing that feels like trying to pin down a butterfly wing, or catch smoke in a bottle. Sure, I was born this way. But born in what way exactly?

As I've reached my thirties, I’ve realised more and more that maybe I don’t fully know my sexuality, and maybe that’s completely fine. I like to think of queerness as a way of interacting with the world as opposed to a fixed state. Queerness is a way of existing on your own terms, as opposed to the ways in which you have been taught to exist. In that sense, maybe there is a queerness in the not knowing, in the unfurling of life as it comes, and in the curiosity of what the future could reveal.

For now, though, I guess I'll just stick with the word “lesbian”, and hope that you know that I always use the term flexibly, openly, and with a small conceptual asterisk.

Daisy Jones is Culture Editor at VICE and has written for British Vogue, the Guardian, New Statesman, Dazed and the Face, among others. She is the author of All The Things She Said, a modern and personal guide to the queer culture of women. 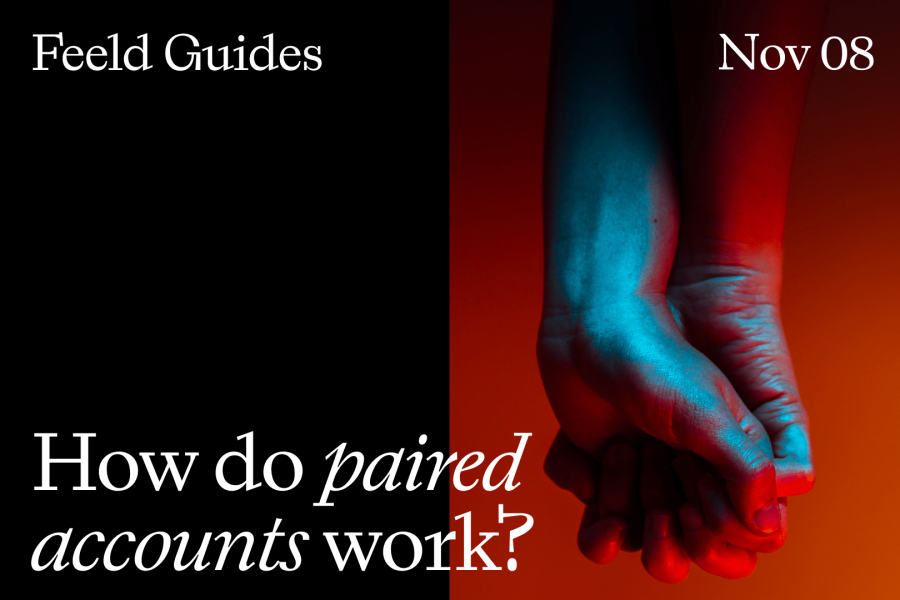 How do Paired Accounts work on Feeld? 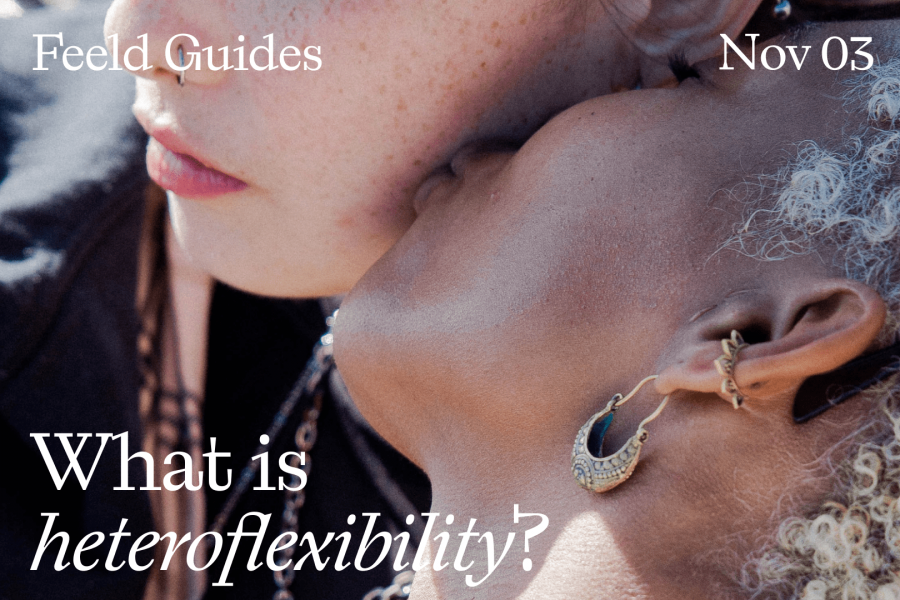